Hydra is a famous Russian dark web marketplace. It was initially established in 2015 for the illegal trade of drugs mainly narcotics. But unfortunately, it did not stop there. The market kept on growing and started the trade of personal data of individuals stolen through different scams and cyberattacks for exploitative purposes. This includes stolen credit card data and other cyberattack services.

The dark web itself is illegal. However, hydra continued its illegitimate businesses through cryptocurrency. The cryptocurrency is being sold through hydra, bought and used as trade and for trade purposes to an insanity level. Despite being totally illegal.

Cryptocurrency is the most beneficial currency for criminals that have ever been introduced in the history of mankind. All kinds of crimes and ransom are possible without getting caught via crypto. Its increasing popularity is insane and tills now its been the most advantageous to cyber culprits.

Hydra has been gone through investigation by Flashpoint and Chainalysis. They presented a full report on the crypto business of the dark web, gained solely in 2020. The report was published to the press on Tuesday where shocking revelations were made regarding the transactions made through the dark web. 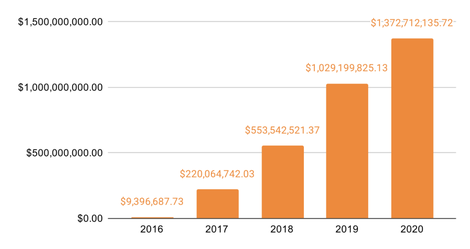 Through all these revelations it has been more stressed upon the fact that Hydra in fact is the most powerful dark web marketplace with its criminal customers all over the world although it only servers Russian Speaking people. According to researchers, every year it makes more than the previous year and comes out more stronger and powerful.

Hydra seems to be a very non-ordinary marketplace by restricting its customers to several rules within trading like only selling to Russian speakers and letting customers transact money only after at least 50 sales. Despite all these and various other restrictions, it is growing at a very shocking rate. This also gives a perception that it only pretends to have such restrictions on its customers to be on the safe side i.e to be distant from the law authorities. As yet it has not been called out by law agencies.

Although Hydra enforces some restrictions on its customers it does not apply the rule of being known to the customer or being aware that whom are you selling your products to or with whom you are trading. All this remains anonymous. This according to Chainalysis a very dangerous. Destination or any information of the customer remains unknown to the seller.

During the past few months, law enforcement is after dark web marketplaces and is trying to cut down their powers. Different marketplaces have been sealed by them and their operators also got arrested.

Irish Healthcare Service IT Systems Shut Down After Ransomware Attack

How to Block Internet Access For Certain Programs in Windows, Mac and Android